Fame, so the proverb goes, is a calamity. To be sure, it's the kind of calamity that looks like a privilege, a disaster that masquerades as respect. But consider what happens when perhaps the greatest calamity of all befalls a writer and he turns into an adjective. A lifetime of work - diverse, idiosyncratic, speculative, contradictory, above all contingent - freezes into a single epithet. The words Chekhovian, Kafkaesque, Dantesque, Pinteresque, Beckettian, Shakespearean, become a deadly row of bullets the critic shoots into the blank wall of cultural regard.

It's part of the endless conflict between the cultural machine and art. Both need each other - without the cultural machine the artist might as well hide in a box, and without the artist, the cultural machine would have no reason to exist. Yet both are mutually hostile, waging a covert war that neither can really win. The machine likes its cultural product categorisable, recognisable, marketable: above all, it needs art to be tame. Artists - which is to say, artists who make any art worth the candle - resist cultural pigeonholes with every fibre of their being. 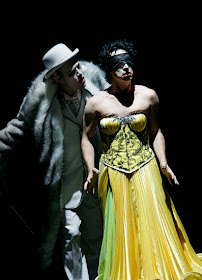 Naturally, the cultural machine likes its artists best when they are dead. "The words of a dead man," said Auden in his panegyric to Yeats, "Are modified in the guts of the living." Hence the faux reverence for Shakespeare, which viciously attacks any attempt to release the living artist from the half-life of monumental fame. Within this is a kind of love, but if it were transposed to actual relationships, it would be the possessive obsession in which the loved object is jealously locked in a dark room. Yet this transformation of living art to cultural monument is an inevitable and necessary process: despite its catastrophic side-effects, without cultural memory the artist and her work would be forgotten. And, as much as the erasure of radicality, this digestion can mean a renewal of vitality. I am the kind of audience member who always prays for the latter.

So, to turn to Brecht, who perhaps more than most others remains locked inside his adjective. "Brechtian" has become shorthand for many things: most immediately, it calls up the theory of Verfremdungseffekt, often misunderstood as an abjuration of feeling in favour of didactic intellection, which itself summons a kind of dour Marxist theatre about tractor drivers. Brecht is, quite rightly, regarded as the exemplary political playwright, and perhaps the most influential of the 20th century: but what is most often forgotten about Brecht - especially in the English language - is that he is a poet.

The Threepenny Opera is an early work of Brecht's. At the time of its writing, Brecht was 29; he had just had his first success with Man Equals Man and was working with the politically brilliant but financially unstable director Piscator, who first conceived of the idea of Epic Theatre. Brecht was then in the early stages of his encounter with Marx: he was yet to meet Walter Benjamin, was on the threshold of writing the first of his learning plays and was midway through his opera Mahagonny. The year before, he had released his first book of poems, The Manual of Piety (Die Hauspostille).

The Threepenny Opera, chaotically scrambled together with Kurt Weill's score and sets by Caspar Neher from Elisabeth Hauptmann's translation of John Gay's The Beggar's Opera, was the work of a young man in extreme creative flux. The premiere famously teetered on the brink of disaster: the dress rehearsal reportedly went down like a lead balloon, and the first night audience sat unmoved through the first act, until suddenly something caught fire and they broke out into wild applause. And thus was born the biggest theatrical hit of the Weimar Republic.

Ever since, The Threepenny Opera has been something of an embarrassment to hardcore Marxist interpreters of Brecht. Its greatest fans were the bourgeoisie whom it supposedly attacked: they liked nothing better than having their greed, hypocrisy and amorality so entertainingly exposed, and no one could demonstrate that they were any the better for it. Yet Brecht never disowned it; rather, he remained somewhat obsessed with it, continually fiddling with the text and even writing a film version.

This alone shows that Brecht the poet always dominated Brecht the political didact. As Eric Bentley points out, with considerable perceptiveness, Brecht's Epic Theatre is really the theatre of a poet. "The epic theory can be represented by unfriendly critics as Brecht's attempt to make a virtue of the special limitation of his dramaturgy, the dramaturgy of a writer of ballads. To which one might retort that the epic form vindicated this dramaturgy and showed that one can derive drama from poetic balladry." Indeed.

Perhaps the most illuminating prepartory read for The Threepenny Opera might be his Manual of Piety, a collection of savagely beautiful ballads satirising religion, some of which later were included in The Threepenny Opera and Mahagonny. Here Brecht pays homage to a formative influence, the thief-poet Francois Villon, and writes blackly robust ballads about dead soldiers or people like the servant girl Marie Ferrar, "Born in the month of April / Rickets, no birthmarks, orphan, not of age", who after unsuccessful attempts to procure an abortion, is found guilty of infanticide. "Her prayers, it seems, had no effect".

It's this godless Hobbesian world, in which the weak wait in vain for the gates of Heaven to open while the strong trample them into the mud, that gives The Threepenny Opera its dark illumination. What's seductive about it is what drives Brecht's prowess as a poet: its amoral, irresistibly vital joyousness. Brecht the poet is the same as Brecht the entertainer: and all the supposed contradictions (as opposed to vitalising creative tensions) of his theory in relation to his writing emerge from glossing this vital aspect of Brecht's work. Even as his plays bent more consciously towards Marxist radicalism, he eschewed neither poetry or entertainment. "Grab them by the balls," he said once, "and their hearts will follow."

The great strength of Michael Kantor's production for the Malthouse is that it reanimates this Brecht, poet, entertainer and wicked trickster. Its first virtue is Raimondo Cortese's adaptation, featuring lyrics by Jeremy Sams, which transposes the action from Victorian London to a 1930s gangster Melbourne. It works for a couple of reasons: like Brecht's vision of Chicago in In The Jungle of the Cities, his Soho is pure theatrical fantasy, and Cortese has simply replaced this with a dystopian fantasy of Melbourne, slimming down Brecht's text by introducing Jenny (Paul Capsis) as a narrator. Crucially, it permits Cortese to exploit Australian obscenity, creating an unsentimentally vernacular diction that's as clean as a knife, and has an immediate contemporary tang. 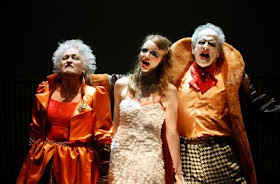 The production itself takes place in a huge boxing ring which stretches the entire width of the Merlyn Theatre, its shadowy expanses exaggerated by Paul Jackson's lighting, which seems more an art of darkness visible than mere illumination. Into this space are wheeled Peter Corrigan's modernist monstrosities, huge mobile sets that jar the eye and act as simulacra of urban dissonance, an organically disturbing mess of architecture. Across this various stage-scape plays Brecht's nonsensical parable of human greed, vice and lust.

Its cheerful cynicism turns conventional morality on its head: here the bad guys win, simply because they are meaner than everyone else. The apparent deus ex machina, in which Mack the Knife is saved at the last minute from the hangman's noose, is a sardonic reversal that, rather than providing an escapist happy ending, reveals an uncomfortable truth: the biggest criminals get off scot-free.

Mack the Knife (played with charismatic swagger by Eddie Perfect) is far from a rough diamond. He’s a killer, a “sadist and a rapist”, a thief and a liar with, aside from a hypnotic sex appeal, no redeeming features whatsoever. Brecht’s undeceived vision saw that Mack’s charisma was not despite his wickedness, but because of it. Like today’s celebrity gangsters, Mack is rewarded for daring to enact society’s repressed desires: his dangerous attraction stems from our secret complicity with his crimes.

Kurt Weill's music, under the musical direction of Richard Gill, is presented in its original shape. It remains as fresh as the day it was written, and is a reminder of how brilliantly Weill wrote for the theatre, and how profoundly he has influenced popular music, from Tom Waits to Danny Elfmann. The music is the glue that holds this show together, and the counterpoint to its poetic dramaturgy.

Kantor and his cast simply go for it, generating an irresistible burlesque energy. For all its joyous spectacle, Kantor keeps the focus on simplicity: one of the few missteps is the decision to play Mack's underlings as hooting monkeys. Capsis and Perfect's riveting cabaret presences provide the vernacular base of the criminal underclass, crude and colloquially direct. The accomplished operatic clarity of Judi Connelli (Mrs Peachum), Grant Smith (Mr Peachum) and Anna O'Byrne (Polly Peachum) enact the gloss of the parasitic middle classes who suck their wealth from the suffering of the poor, who themselves are represented by the bruised and endlessly exploitable beggar Filch (Jolyon James).

Whether it makes an effective political statement remains a question of debate: like all satirists, Brecht was half in love with everything he hated, and that ambiguous sense of fun remains as blasphemous as ever. But as this Malthouse production shows, it's brilliant theatre. Most of all, it's brutally alive and wicked fun: which is to say, it's utterly Brechtian.