There are few more isolating experiences than sitting unmoved in an auditorium that echoes with muffled sobs. Critics are supposed to be carved of flint, so perhaps it isn’t surprising that I sat through Holding the Man with scarcely a flicker of emotion. But given the passionate responses this play has elicited, such indifference feels slightly disturbing. I didn't especially dislike it. I just didn't feel anything much at all.

I don’t doubt for a moment the reality of the feelings prompted by this show, nor the sincerity of those who made it. And it's clearly struck a chord in a wide audience: this MTC season is this production's sixth, after four hugely successful seasons in Sydney and another in Brisbane. Review after review, tribute after tribute, lauds its profound emotional impact. So what am I missing? 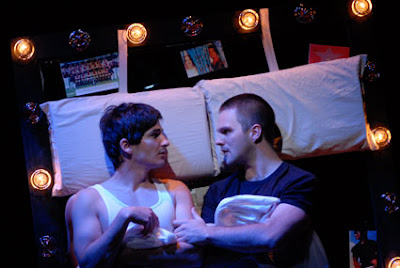 As theatre, Holding The Man seeks to touch a particular constituency – by which I don't mean the gay community, but a certain kind of theatrical audience. As I am clearly not within this constituency, I can't but feel that these impassioned responses are less to the play itself than to its subject matter, and are validated by a sense of its authenticity. Holding The Man carries the potency of witness reports: this is real, this happened to real people.

It’s a fine line – this assertion is also part of the emotional engine behind one of the most powerful theatre pieces I’ve seen, Ariane Mnouchkine’s Le Dernier Caravansérail – but too often work underpinned by these notions of authenticity can become a kind of emotional pornography. I’m not one who believes in art for art’s sake, but in things artistic I agree with Oscar Wilde’s observation that “in matters of grave importance, style, not sincerity, is the vital thing.”

Tommy Murphy's play is adapted from Timothy Conigrave's memoir of the same name, a much-loved text that for many Australian gays articulated their experiences of the early days of AIDS. Published after Conigrave's death, it tells the story of his turbulent 15 year relationship with his lover John Caleo, from their first meeting in high school, to Caleo's death in the early '90s. As Nick Enright said in a short piece he wrote on the book, "it documents some aspects of life in our community in two particular periods of self-definition (seventies liberation and the health crisis of the eighties)". Its adaptation to theatre can't help but be reductive, and director David Berthold is quite frank about what the play was to be: "We wanted the love story".

So Holding the Man recounts, through a series of episodic scenes, the story of the love between Tim (Guy Edmonds) and John (Matt Zeremes). John remained faithful despite Tim’s serial infidelities, which gave him the disease that ultimately killed both of them. Murphy adapts the book as a conventional bio-play, moving chronologically from their first meeting. Aside from Tim and John, all roles are doubled, with the other three actors between them playing more than 40 parts. Edmonds and Zeremes give appealing performances, but they are the only actors who can: the other performers can do little more than bounce around like cartoon characters, providing a kind of animated background to the story.

It’s written for a certain kind of theatricality, which incorporates puppets and physical theatre in a swift-moving, impressionistic narrative. Although it moves very slickly under David Berthold’s efficient direction, it’s the kind of theatre that always calls up for me memories of Theatre in Education shows in high school. Everything is directed towards moving towards the emotional climax, in a dramaturgy that sacrifices depth in favour of surface movement.

Much of the script rests on the dynamic of recognition: there are rather too many in-jokes about Sydney theatre, for instance. Or a snatch of Supertramp here, a reference to Inflation there, and voila! it's Melbourne in the '80s. Perhaps if I had read the original book, my imagination might have supplied some of the complexity so signally missing on the stage.

As it is, the play is almost a text-book example of how sentimentality can be used to obscure the very issues it claims to be exploring. I suspect this is another reason it left me cold. Unlike, say, The Normal Heart, Larry Kramer’s powerful and angry play about the early days of AIDS and its devastating impact on the gay community in New York, there is no sense that its implications go beyond the merely personal.

Like Tommy Murphy, Kramer employs a narrative that is clearly autobiographical, of a love story between two gay men (one of whom is a writer and who, presumably, ends up writing the play we are seeing). And it is written with a directness, anger and love that pulls no punches: it's an emotionally gruelling play. But Kramer also creates a critique of institutional bigotry and indifference which remains as pertinent now – in the new dimensions of the AIDS crisis in Africa, for example, which chiefly impacts on women and children – as it was back in the 1980s, when the main victims of HIV were gay men.

There is no such possible connection in Holding the Man, where complexities are largely airbrushed out in favour of an idealised romance that does everything but stick love hearts around the stage. For all its frankness about things of the body - the details of sex as much as illness - it has an air of Disney about it, a feeling that all complexities, paradox, difficulty and pain are absorbed into a consoling emotional orgasm.

On the other hand, no artwork need be more than it is. And there's nothing essentially wrong with tragic love stories with huge emotional climaxes: they are, after all, the very fabric of classical opera and epic poetry. Whatever the reason, the earth just didn't move for me.

Picture: Matt Zeremes and Guy Edmonds in Holding The Man.