It’s kind of weird to scroll through the pull-quotes for the Broadway season of Rock’n’Roll, Tom Stoppard’s unstoppable hit about, well, everything except rock and roll. The critics reach for their superlatives and then keep hopping up ever more vertiginous cliffs of fancy. I know I start foaming at moments of excitement, but this mass froth-fest could float a Titanic. 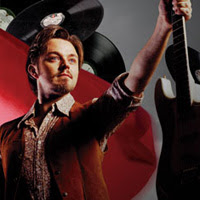 “Triumphantly sentimental,” cries Ben Brantley of the New York Times. “Rock’n’Roll is arguably Stoppard’s finest play. He is a magician, and this is a passionately acted, decades-spanning tale of love, revolution and music. …Stoppard treats the characters of for Rock’n’Roll with a deep affection I've never encountered from him before.” Clives Barnes of the New York Post hands it four stars and says it is "funny and enthralling". “Rock’n’Roll offers you something to take out of the theater you didn’t come in with… revealing the human face of Stoppard behind all the nervy, nervous brilliance.” While Terry Teachout of the Wall Street Journal finds it “an intellectually challenging, intensely theatrical piece of work that is destined to be talked about wherever playgoers gather.”

Though a mere drop of what’s out there, that is probably enough lurv; if you want more, you can google the reviews yourself. It’s a fair sampling of how Rock’n’Roll has been received by critics in the US and Britain. Of course, my worthy colleagues were speaking of Trevor Nunn’s production, which opened to similar plaudits at the Royal Court in London before doing Broadway business in New York; but I’m certain that Simon Phillips has directed the same play.

I can’t really fault Phillips’ production at the Playhouse. Brilliantly cast, swift, economical, and stylish, it demonstrates the kind of panache that was missing from Phillips’s directorial vocabulary all through 2007. Stephen Curtis’s design wisely eschews Nunn's revolve in favour of a concert stage dominated by a huge screen, on which is projected a collage of documentary footage – the fall of the Berlin Wall, John Lennon and Yoko Ono’s bed-in, even (briefly) the dismissal of the Whitlam Government. These shift when necessary to scenic backdrops such as Cambridge oak trees or Prague buildings thrusting up through snow, with tables and chairs being whizzed on and off stage by the actors. It all works, and sometimes it works very well indeed.

And then there’s the play. The problem is, I just don’t get it. Let me, for the briefest moment, place my glasses over your eyes. Rock’n’Roll looks to me like a rather pedestrian history play. It plods through the final decades of the 20th century, with the odd burst of Rolling Stones or Pink Floyd adding a brief glamour to grim images such as the Soviet tanks in the streets of 1968 Prague. With the exception of a couple of undeniably powerful moments, I simply don’t understand why it’s made rational people go weak at the knees. Maybe it's just a function of nostalgia for the 1960s. Maybe you had to be there.

Punk, briefly the most anarchic music of them all, scarcely scores a mention. The closest we get is The Cure. I’m not enough of a rock snob to follow the semiotics of this, but somehow it is of a piece with the play. Punk wasn’t nice and – when it started, anyway, which was also more or less when it finished – it was about poor kids. This is not a play about poor people, in the same way it’s not about rock music. It’s about people who worry about poor people, and who have record collections. It talks about passion, which can often be mistaken for passion itself, but – as Osip Mandelstam once said of some unfortunate poet – the sheets are unruffled: the muse has not spent the night.

Rock’n’Roll is by no means a great play, and certainly nowhere near Stoppard’s best. I’m not even sure if it’s a good play. It’s just... determined. You know that Czechoslovakia is going to get the Rolling Stones, and by gum they do; and freedom radiates everywhere, as if the Stones were the model of democratic equity.

Stoppard wisely stops history in 1990 - before the Balkan Wars, the razing of Grozny, the rise of the Russian Mafia and the increasing tyranny of Putin’s leadership can make his thesis about capitalism’s essential benevolence a little strained. You can see that a little handkerchief is fluttering for British decency and oddness, which is so much nicer than almost anything else. The faithful old Cambridge Marxist Max (William Zappa) is politically compromised and ideologically wrong, but underneath it all, he's really a loveable chap.

There is one extraordinary speech from Eleanor, who is dying of cancer, which is delivered with such passion by Genevieve Picot that the hair stood up on my neck. And the other real moment of the play also belongs to Picot, this time as Eleanor’s daughter Esme. Both are moments when eros becomes more than an interesting word, but rather the vital, dangerous and powerful force that underlies life itself.

But these come out of nowhere. Between them are many tedious set pieces where different characters argue about, for instance, What Went Wrong With The Revolution in a kind of sub-Trevor Griffiths way, or in which we’re clunkily given the intellectual subtext (Pan, Eros, Sappho and Pink Floyd versus Marxist collective consciousness and the Eastern European police state).

Phillips has such a good cast that they mostly make a silk hearing aid out of the sow’s ear. They can’t transform the script into something it's not, but they create a fluid dynamic on stage that injects a lot of pleasure into watching the production. There are no weak performances: besides Picot, who reminds us that she is a major talent who is not seen enough on our stages, I enjoyed Matthew Newton’s portrayal of Jan, the reluctant Czech dissident who, in spite of himself, finds that wanting to listen to rock music is a subversive activity, and Chloe Armstrong's disarmingly passionate performances as the young flower-child Esme and Esme’s daughter Alice.

There are a couple of excellent thumbnail sketches: Grant Cartwright’s vivid appearance as the new generation Cambridge Marxist, and Danielle Cormack as the Czech intellectual exile, Lenka. William Zappa bears the brunt of Stoppard’s desire to turn drama into a history of ideology, and all I can say is, he does his best, finding life even there. But with all this talent, all this energy, all this style and money, it’s still an ordinary play.

There’s a very strange scene in which Stoppard makes a clumsy attempt at Pinteresque menace, and achieves something rather like the Monty Python sketch where Inquisition victims are threatened with a comfy chair (or, in this case, a stale biscuit). Our dissident’s record collection is smashed up, but we understand nothing about his prison sentence: everything remains at the level of idea. You no more feel the visceral terror of the secret police (as you do, say, in Kafka’s The Trial or Ismael Kadare's The Palace of Dreams) than you want to get up and dance.

It did make me wonder why I wouldn’t be better off reading a book. A decent post-war history and Anne Carson’s excellent book on classical poetry, Eros the Bittersweet, with Pink Floyd on the turntable, would basically cover all the necessary territory.

Stoppard recently turned 70. It's been a long time - more than four decades - since the wordplay and irresistible intellectual conceit of Rosencrantz and Guildenstern are Dead dazzled English critics. Since then he's written about the failures of ideology, the drama of the Cold War and the nexuses between art, science and politics in play after play - Travesties or Hapgood or The Real Inspector Hound or Squaring the Circle, to name a few. He could write about this stuff in his sleep; and, judging by the linguistic vitality of Rock'n'Roll, he probably did.

I have formed a theory that Stoppard is no longer a playwright, but a phenomenon (JK Rowling is another). There is nothing you can do about a phenomenon, since the responses to the phenomenon have very little to do with what said phenomenon actually writes.

If this play were written by Tom Smith, you can be pretty sure that nobody would have noticed it. But because it’s by Tom Stoppard, it is automatically “witty” and “intellectual”, whether this is borne out in the script or not. We can laugh while chewing on the roughage of, say, Sapphic scansion in the Latin poetry of Catullus, and feel perhaps a teeny bit intimidated and maybe, too, a teeny bit superior.

As I left the Playhouse, I had a brief conversation with a nice man who had obviously enjoyed himself. He became a little annoyed when I said that I had been mostly bored. He said that Rock'n'Roll was entertainment, and couldn't be held to the standards of serious art (and that, basically, I was being a snob; only he was too polite to say so). But I don't think it's as easy as that. A huge element of the dazzle that surrounds Stoppard is the illusion that he makes a "theatre of ideas"; that in fact, this isn't mere "entertainment", but a worthy kind of art. It's art as social artefact, as intellectual trinket, for an economy that values information over wisdom.

Me, I'm unable to tell where art finishes and entertainment begins. I find Pirates of the Caribbean or Chicago entertaining, but I think Waiting for Godot is entertaining as well. On the one hand, I don't think Rock'n'Roll is entertainment; but on the other, I don't think that it's art, either. It's something else. I'm not sure quite what it is, but I suspect it's some kind of mass hallucination. The real question is whether it is, as The Hitchhiker's Guide to the Galaxy said of Planet Earth, mostly harmless. Or not.