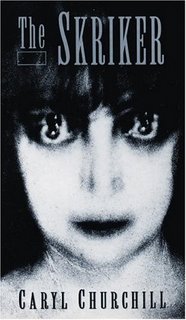 One of the vexing and beautiful things about writing about theatre – one of the primary reasons I keep doing it, I guess – is that the more profound the experience is, the more difficult it is to express in words. So often when theatre resonates deeply, it’s because it strikes chords that are crude and primitive and naïve. What is that quality which transforms what might otherwise be mere foolish pretence into an act that plucks at the roots of the psyche, waking out of the darkness the monsters that walk in all of us?

It is, for example, a truism to speak of theatre’s “magic”. The Skriker, surely one of the strangest and cruellest plays of Caryl Churchill’s extraordinary oeuvre, reminds us what magic actually is. You can be sure, there is nothing benign or twee about it: this is the world of the uncanny, the cruel, the unhuman, the heartless. Almost a dystopian version of A Midsummer Night’s Dream, The Skriker draws on ancient English and Irish folk and fairy tales to look at some inadmissably dark truths about fertility, motherhood and damaged nature.

Brian Lipson and his company of actors take Churchill's bleak, disturbing play and realise an entire theatrical world that is like being in an enchanting and sinister dream, a damaged world of transformation and dis-ease. This is, in every sense, demanding work: it wolfs your entire attention for three hours with a constantly inventive mise en scene of resonant theatrical image. Oneiric, haunting and toxic, it's one of the most powerful pieces of theatre I have seen this year.

In The Skriker, Churchill draws elements from folk and fairy tales about “good” and “bad” women and places them in contemporary urban settings. She creates a world of hallucinatory mirrors: the human overworld mirrors the faerie underworld, the bad mother mirrors the good, the animal mirrors the human, the changeling mirrors the real child. It's perhaps a particularly English tradition of Gothic: Churchill's desolate urban world reminds me strongly of the London fantasy writer China Mieville’s gritty realities - in particular, his dark tale of contemporary magic, Familiar, in his short story collection Looking for Jake.

Josie (Susan Miller) is the bad sister: we meet her in an asylum, where she has been confined after murdering her newborn baby and baking her in a pie. The good sister is her friend Lily (Julie Wee), who is pregnant. Both of them are haunted by the Skriker, a shape-shifting fairy who envies and desires their fertility - babies have high value in the sterile world of Faerie - and seduces them by granting their wishes. She turns up in various guises - as an American woman in a bar, a nasty little girl eaten up with sibling rivalry, a lover who behaves like an obsessed stalker - and tempts both of them down into the carnivalesque Underworld.

Around the three major figures erupts a world infected with malign enchantments, a population of lost and dead children, lunatics, hags, kelpies, bogles and monsters. Nothing here is “natural”: environmental apocalypse is as much part of the sickness this play expresses as mental illness. It’s interesting to think that it was written, to some hostile incomprehension, in 1994: as climate change becomes more urgently evident, as the World Health Organisation warns that mental illness will be the major growing health problem over the next two decades, it now seems spookily prescient. As the Skriker says: “It was always possible to think whatever your personal problem, there's always nature. Spring will return even if it's without me. Nobody loves me but at least it's a sunny day. This has been a comfort to people as long as they've existed. But it's not available any more. Sorry. Nobody loves me and the sun's going to kill me. Spring will return and nothing will grow.”

Theatre is a place where the archaic meaning of “glamour” – a spell, an enchantment – still hangs vapourously about its more conventional usage. In its original sense, glamourie was the word given to the ability of fairies - the Irish Sidhe, the Norse Alfar or the English Faerie - to transform and fool human senses. One of glamour’s most common uses was to change human beings into animals. So in the Odyssey, Circe changes Ulysses’ shipmates into pigs, or the fairy queen Titania in A Midsummer Night’s Dream transforms Bottom into an ass.

The production begins with this kind of transformation: in the theatre foyer, a boy, up to this point seemingly another member of the audience, is turned into a pig. Inside the theatre, we hear the sounds of animal howls and shrieks, and the beasts begin to hammer on the door…and thus we are led inside, into a claustrophobic tunnel like a cattle race, dimly and obscurely lit by a single reddish-yellow lightbulb. It is like the inside of a womb, or a limbo of the half-formed, where the audience members mill around with cast members that we can barely discern, surrounded by a cacophony of bestial noises. We emerge into a corral, surrounded by higher platforms on all sides; the lights widen, and human speech begins to emerge from the squeals and growls.

This introduces the first movement, as it were, of this production, which divides roughly into three main parts. The first is a promenade, opening with an evocation of Churchill’s long introductory speech, in which language itself becomes other. Much of the text – the words of the Skriker, the damaged fairy – is a collage of word association, in which meaning is on the verge of slipping into nonsense. “Slit slat slut. That bitch a botch an itch in my shoulder blood. Bitch botch itch. Slat itch slit botch. Itch slut bitch slit….Whatever you do don’t open to do don’t open the door...”

This is language as thickness, viscera, weight, saliva, sex, violence, the softness of palate and lip: language as spell and enchantment, where meaning constantly threatens to slip its noose and collapse back to animal howl and croon. Here Churchill is pushing theatre hard up against the poem, sense against nonsense, and one can only admire the force of the centrifugal will that keeps the text this side of comprehensible. Lipson divides the Skriker's speech between the actors of the company, who vocalise it as a sound poem or a spoken oratorio around the audience. Focus is constantly shifting: you might be listening to an actor standing at your shoulder and then to a figure suddenly lit in the distance, who as suddenly vanishes. It is a wholly immersive experience, at once shockingly intimate and alienating.

The first clear piece of narrative is a scene in a lunatic asylum, where Lily is visiting Josie. This is performed on four sides, the audience still standing in the centre, by four sets of actors; again the words are carefully orchestrated, so each scene is at once clear and splintered. No scene is identical, either: each set of actors moves and interprets the text differently. The effect is arrestingly disturbing, the beginning of a sense of a world without mooring or base reality from which reference can be made, and the realism of the performances – which touch precise emotional authenticities – is an edge against which the carnivalesque world of Faerie is whetted.

It’s a contrast which is fruitfully worked through the evening, and which gives this show much of its richness and complexity: if it were merely clever and cruelly comic (and it is both) this production wouldn't possess its dark and urgent potency. Behind this show is an attuned attention to the emotional and psychic disturbance that occasions it, and it's reflected in the emotional fearlessness and clarity of the performances that Lipson has elicited from each member of his young ensemble.

The design is a mixture of contemporary street aesthetic and the grotesque, with liberal use of mask and costume. One wall of the theatre is piled to the roof with cardboard boxes, and the stage space is shaped by trolleys, which are used in all sorts of ways: scenes are sometimes performed on top of them, or sometimes, as in Ariane Mnouchkine's Le Dernier Caravansérail, the performers are wheeled on platforms by the other actors, so they can be at once still and in motion.

After the animal intensities of the opening sequences, the production segues to a series of scenes which play on mirroring: a bar sequence, for example, performed in double vision, with actors each side mirroring the actions of the others. After the interval, when Lily's baby is born and Josie escapes the Underworld, the scenes are more singular, and the sense of a borderless, anarchic world narrows down to domestic gothic (although this is simpliflying considerably). Among many other elements - this is a show headily rich on texture - there is witty use of Qioa Li's audio-visual material, from four television screens suspended from the ceiling: distorted news reports, nightmarish music clips, and a mixture of live and recorded images. The sense of multiple space invoked in the theatre is reinforced also by James Shuter's ingenious lighting design.

Primarily, something which really only became clear at the finish, I was struck by this production's elegant and powerful coherence. Reflecting Churchill's language, Lipson places the theatre under such imagistic and emotional pressures that the experience constantly threatens to fly apart into its disparate elements. He keeps it together by dint of acute directorial exactingness: this is a very detailed and carefully focused production. There were only a few moments where I felt the intensity and energies began to slacken, and even then, on reflection, I am not sure.

What I am sure of is that watching this play was totally compelling, and I will be chewing over it for days hence. Maybe for years. It's rare to see work in which linguistic, emotional and visual complexities of this order are realised with such thought and art. Some pieces of theatre stick with you, altering the colour of your mind; and for me, this was one of them.