The Birthday Party and other late thoughts

I briefly reviewed Julian Meyrick's MTC production of The Birthday Party just over two weeks ago and have been meaning to write about it at more leisure ever since. That I haven't yet done so is symptomatic of (a) the time of year - it's flu season here in Williamstown, and various microbes have been doing a serial dance through the family home - and (b) the difficulty I'm having balancing the conflicting demands of my increasingly chaotic life. So this is a brief cathartic visit to some thoughts that have been irritating the delicate membranes of my synapses over the past fortnight.

Another reason for the delay was that I wanted to watch the 1968 William Friedkin film of The Birthday Party. Thanks to the magic of Amazon, it arrived last week. The screenplay was adapted by Pinter himself, and it features a great cast, with Robert Shaw in the central role of Stanley, Patrick Magee and Sydney Tafler as the mysterious strangers McCann and Goldberg, Dandy Nichols as the naive landlady Meg and Moultriie Kelsall as her husband, Petey. It's very much a film of its time - some of its special effects are worthy of YouTube - and it's obviously made with a budget of around $2. But it remains an astounding film. 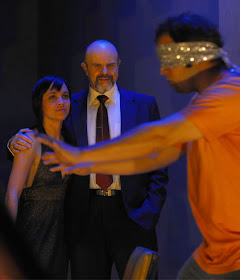 It's not, by any means, comfortable family viewing. You watch it all the way through with your stomach in a knot, unease growing with the slow inevitability of nightmare as the play's banal but obscurely threatening situations unfold. What these performances do so beautifully is to demonstrate the startling dislocations of Pinter's dialogue, how he violently wrenches language from its emotional subtext. The story of the film is not in what is said, but what is going on in the actors' faces: the fear in Nichols' face as Shaw suddenly turns on her, asking if she knows who he is; Shaw's seemingly irrational terror when the two men appear in the miserable boarding house where he has been living for the past year; Magee's hesitation and fear in the face of Tafler's smoothly civilised violence.

It's not the notorious Pinteresque Pause that matters here; it's what going on underneath the language, which may indeed flower into silence, but equally occurs in the estrangement of the dialogue. The fact that Pinter's name is practically synonymous with the Pause has always faintly baffled me: other playwrights (and not only Beckett) have used pauses, which act as the writerly equivalent of musical notation, an indicator of linguistic and emotional rhythm. So why should Pinter's be so controversial? But those who wish to belittle his achievement for whatever reason - political disagreement, artistic hostility - always refer to the Pause, which is I guess a way of eliding the fact that he actually wrote a lot of words in between his silences.

It strikes me that this discomfort with Pinter's pauses reflects a wider cultural response to silence. We don't know what to do with it: we have to fill it up with noise, as if silence is a yawning abyss that threatens to devour our souls. I've noticed this especially when watching anime: the master of the medium, Hayoa Miyazake, uses silence beautifully in his carefully constructed soundtracks. But if in error I put on the dubbed versions instead of the subtitled Japanese soundtrack, suddenly all that fertile, evocative silence disappears under a welter of music and dialogue.

And it also reflects a cultural discomfort with, well, discomfort itself. Have we such a terrible fear of ourselves, of what might emerge if we are forced to contemplate the realities that underlie the camouflaging gabble of language, that we literally can't face it?

Which brings me to Julian Meyrick's production, now running at the Fairfax Studio in the Arts Centre. I think this is a perfectly respectable and intelligent production of the play, which in many ways brings a contemporary vitality to The Birthday Party. Meyrick has cast it mainly with Indigenous actors, in a rare and welcome example of main stage cross-racial casting. Smartly, he has avoided obvious racial power relationships: power and disempowerment reside in every character. The single white actor is Marshall Napier, a man of slippery identity, who is the locus of hidden but palpable violence. Goldberg's Irish sidekick McCann is played by Glenn Shea, his Irish song replaced by an Aboriginal chant. (This subtly draws an interesting parallel between the colonisation of Ireland and Australia). And I was particularly taken by Pauline Whyman's beautiful portrayal of Meg, the naif whose fantasy world almost completely protects her from the sharp edges of reality.

But - and for me it is a large but - there was something missing in the middle of the play. It was characterised by Isaac Drandic's performance of Stanley, which I am guessing, having never seen Drandic in action before, was a directorial decision. And perhaps - not having seen it again, I don't know - this performance has evolved from opening night. On the night I saw it, Drandic was a blank: he responded catatonically, with none of the repressed violence so characteristic of Shaw's performance in the film. This gives the performance nowhere to go, since in the final scene he really is catatonic; because he has been emotionally blank from the beginning, his inability to speak is much less devastating. And it neutralises many of the exchanges in the play, as Stanley is always a passive victim.

This sense of soft-focus permeates the tone of the whole production: the squalor of the boarding house, physically palpable in the details of Friedkin's film, is here rendered with a respectable cleanliness. There are moments of sudden brutality, moments of discomfort, but instead of winding slowly up to a kind of stomach-twisting panic, they dissipate in comic relief. It's too easy in this production to read The Birthday Party as a kind of surreal comedy about "those" kinds of people - lower middle class, Not Like Us - because its real power, its merciless exposure of the dark animal impulses in human behaviour, is muffled. The sense of interior nightmare never takes hold where it counts, in the primitive caverns of the subconscious.

The performances and direction bring out the absurd comedy of Pinter's language, which is in itself no bad thing. Like Beckett, Pinter is full of comedy: also like Beckett, he is also deadly serious, and laughter is only sometimes on the menu. Discovering that a playwright is funny shouldn't, as regularly happens with Chekhov, elide the tragedy that drives the drama. As I watched it, I thought of Howard Barker's stern comments about laughter in the theatre. "Laughter appears to be a manifestation of solidarity," he says, "but it is now more often the sign of subordination. It is pain that an audience needs to experience, and not contempt. We have a theatre of contempt masquerading as comedy".

I think Australian theatre is not arrogant enough to generate the contempt Barker speaks of. Rather, the impulse towards comedy reflects a different kind of subordination. It seems to me to be a fear of the audience, a fear that they will not get it, a fear that if they do, they won't like it anyway. Who, after all, wants pain? And in this fear we lose the larger possibilities of art, its paradoxical exhilaration and joy.

There is, alas, good reason for these fears, as the conversation after my review of The Man from Mukinupin - probably the MTC production I've enjoyed most this year - demonstrates all too clearly. And certainly, the production of The Birthday Party has been warmly received; indeed, it's been welcomed almost with relief, as if a visit to the dentist defied expectations by serving up chocolates instead. But I can't help pondering the value of presenting Pinter in a prophylactic, with all the danger at a comfortable remove. On the one hand, yes, there's more chance of attracting an audience to the work of a playwright generally considered "difficult". But on the other, what is the point, really?

Note: for more discussion of the play, you can find an earlier TN review of a production of The Birthday Party here.

Picture: (from left) Jada Alberts, Marshall Napier and Isaac Drandic in the MTC's production of The Birthday Party.